Events are a big part of our culture at Mahercorp. We pride ourselves on our regular staff development events, philanthropic activities as well as 'outside-the-box' social events.

We participate in our charity partners various events as well as broader charity events - big and small. Plus we have two biennial events we organise ourselves, Urbandura and Culture Day.

Five years ago, an unfortunate situation left Father Bob Macguire short a mobile food van. This van was operating 4 days a week to feed people in need around the city fringe of Melbourne and without the van, Father Bob’s Foundation was unable to feed those in need. Steve Maher, Director of Mahercorp, has always been passionate about helping those in need and contributing to the local community and reached out to Father Bob to organise a new van for his foundation so he could get back out to the streets distributing meals.

The van was named the Hopemobile, sponsored by Urbanedge Homes and it was from there that Steve and Father Bob began a great relationship. Father Bob Maguire is extremely active on the streets, getting out there himself to make sure his vans are getting to where they are really needed, lending a hand and offering support to those in need.

As a passionate bike rider, Steve Maher launched Urbandura in 2013; a 500km bike ride from Mildura to Melbourne with the purpose of raising money and awareness for The Father Bob Maguire Foundation.

Now three events in, the ride has raised over $110,000 for Father Bob and it has now become a regular biennial event and makes up a key part of Urbanedge’s philanthropic calendar.

Culture Day has always been a big part of our business and has evolved a lot over the last 15 years. In its infancy it was a trip away for team development activities and fun but it has evolved to be a day for us to give back to the community.

Once every two years we shut our doors for the day to raise money and give hope to those who are less fortunate.

2018 Culture Day was a fun filled day with team building activities such as an obstacle course and even a singing and dancing workshop.

Stay tuned for details on our 2020 event! 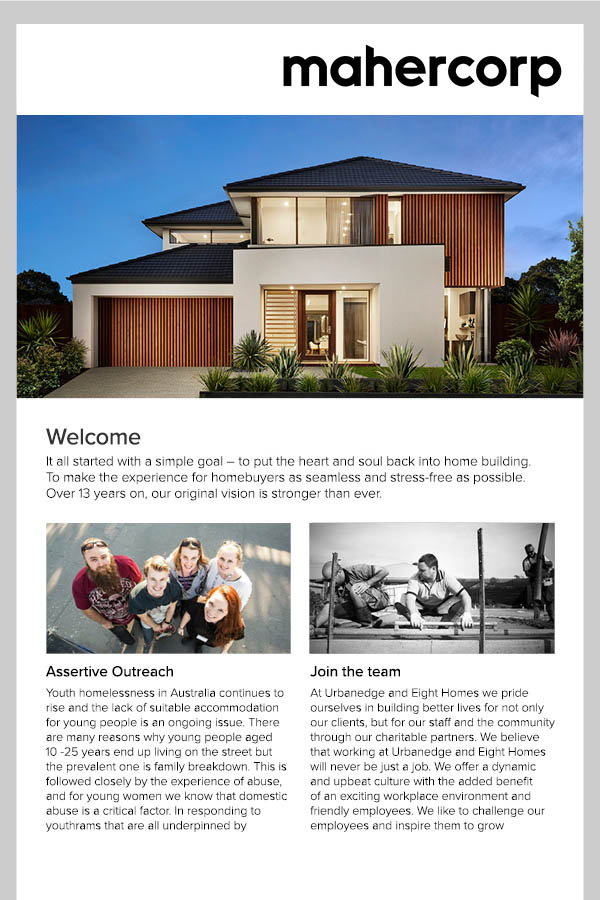 Subscribe to our newsletter to stay informed about all the latest from Urbanedge & Eight Homes.